On Friday evening, 3 more athletes were inducted into the Wildcat Athletic Hall of Fame for their superior impact on their respective sports.  Congratulations to Paul Harman, Zack Spence, and Alonzo Johnson. 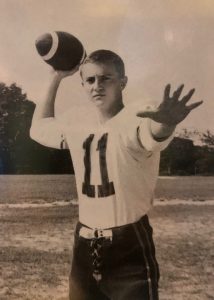 Paul was a three sport standout for the Wildcats from 1959-1962, playing football, basketball, and baseball.  He played quarterback and defensive end in football.  He was a guard and forward in basketball and was the baseball team’s starting shortstop.  Paul earned seven letters during his Wildcat career, four in football, three in basketball, and one in baseball.  Paul earned many athletic awards.  In football during the 1962 season, he was the team’s co-captain and made South Carolina All-State, All-Midlands, and earned a spot on the North-South team.  In basketball, he was co-captain on the team that won the 5A championship and was named to the All-Tournament team.  Paul accepted a four-year scholarship to the University of South Carolina and played four years as quarterback and cornerback from 1963-1966.  Paul is married to Gale McFarland Harman, a 1964 LHS graduate who was Homecoming Queen in 1962.  Paul and Gale live in Lexington and have two children, Brett and Shannon.

Zack played football and baseball for the Wildcats from 1972 through 1975.  He earned seven letters, three in football and four in baseball.  In football, Zack played linebacker, tight end, punter, and place kicker.  He was named All-Conference, All-State, and All-American.  On the baseball team, Zack compiled a career pitching record of 24-2, throwing three no-hitters and two one-hitters.  One of the no-hitters was a perfect game with 16 strikeouts.  As with football, he was All-Conference, All-State, and All-American in baseball.  Zack was senior class president in 1975 and was a Palmetto Boys State participant.  He played baseball for Furman for one season before transferring to the University of South Carolina where he sustained a career-ending injury.  Zack and his wife Julynn have three children, Courtney, Zack, and Kylie and live in Lexington.

Lonnie was a three sport standout for the Wildcats from 1995 through 1998, playing basketball and football, and running track.  He earned nine letters, three in each sport.  Lonnie was named to All-State, All-Area, and All-Region teams in basketball in 1998, averaging 12 points and 7 rebounds per game.  He played on the 1996 state champion basketball team.  In football, Lonnie was named All-Area and All-Region and led the state in interceptions with seven from his safety position.  On the track team, Lonnie participated in the high jump and ran sprints.  He currently resides in Rock Hill.