In front of a raucous, near capacity crowd, Lexington eliminated Conway and moved on to play in the Lower State final.  It was another record-setting night as the Cats notched their 29th straight win.  The group has not lost a game since February 14, 2018.  The victory was also number 637 for Coach Bailey Harris as he moved into 6th place in SC High School League career coaching wins.

The Wildcats quickly built a 7-0 lead and maintained that margin as the 1st quarter ended with the Cats on top 13-6.  They pulled away by 13 at the half with effective shooting and a defense that limited Conway scorers Tonka Hemingway and Timothy Steele to 4 and 2 points respectively at the break.

With 5:21 remaining in the 3rd quarter, Conway’s James Bellamy hit a three, then Braxton Graves layed one in off a steal to pull the Tigers to within 8.  But the Lexington offense exploded from there and posted a 12-0 run.  Jonathan Corley netted a 3-pointer, Ryan Green sunk a short jumper followed by a three.  Mason Carver got to the line and was good on both shots.  Bradley Foulks followed with a short floater.  Suddenly the score was 45-23 nearing the end of the 3rd frame.

Conway made one last run, pulling within 9 points with 1:41 to go led by 11 points from Hemingway and 9 from Steele. but down the stretch when the Cats were sent to the free throw line, they responded, sinking all 10.  The final score was 61-49. 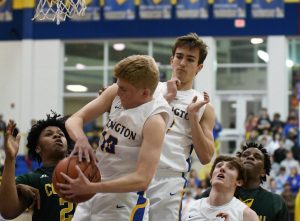 Mason Carver led his team with 20 points.  He has now totaled 1,172 points as a Wildcat.  Three of Carver’s teammates were in double digits:  Ryan Green 13, Bradley Foulks 11, and Jonathan Corley 10.

Lexington moves on to the Lower State Final for the first time in 7 years.  They will face Berkeley this Saturday at the Florence Civic Center with a tip time scheduled for 6:30.  The Berkeley Stags advanced with a 72-52 win over West Ashley.

In the Upper State, Dorman blew out Spartanburg, 80-36 and Mauldin edged Nation Ford in a comeback win, 79-75.

No Events This Week

Events are added by athletic staff.
View All Events