On February 25th, Jacob Brasseur won the individual state wrestling title in the 113 pound weight class.  It was only the 12th time in Lexington High School history that any wrestler won an individual title in any weight class.  Today, Brasseur was named “Co-Wrestler of the Year” by The State. 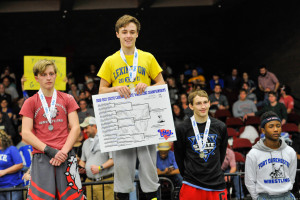 Jacob Brasseur finished 3rd as a freshman and was runner-up last year before capturing the big prize this year.  In the final match, Brasseur defeated Drew Thomas of Boiling Springs 9-2.  It concluded a highly successful season in which he posted 52 wins against just 1 loss.

Previously, in the state quarterfinals, the Lexington junior took an 11-0 decision against Fort Mill’s Jacob Sturgeon.  Against Sam Emery of River Bluff in the semi’s, he came out on top, 8-4.

With one season yet to go, Brasseur has compiled a 157-7 record on the mats as a Wildcat wrestler.

No Events This Week

Events are added by athletic staff.
View All Events